Pierre Luis Vasquez (October 3, 1798 – September 5, 1868) was a well-educated man who spoke seven languages and resided in St. Louis, Missouri. His father, Benito Andres Vasquez, came with the Spanish Army from Galicia, Spain, to establish forts on the Mississippi River. Benito married a French Acadian, became an Indian trader and helped found the city of St. Louis, Missouri. His brother Antoine “Baronet” Vasquez was the interpreter for Zebulon Pike when in 1806 he explored the Huerfano County area of Colorado.

Pierre Luis Vasquez (later called “Louis”) was a partner with Jim Bridger at Fort Bridger in 1846. Louis married a widow, Narcissa Burdette Land, about 1846 in a civil ceremony. The Vasquez marriage was solemnized by Father DeSmet on the junction of Horse Creek and the Platte River September 25, 1851, at the occasion of the “Great Smoke” also known as The Horse Creek Treaty. The location of the Treaty signing is just east of what today is Henry, Nebraska.

Louis and his partner, Andrew Sublett, after attending summer rendezvous (trapper celebrations) for two years in the Colorado Roch Mountain region, obtained a license to trade with the Indians in 1835. In the fall of that year, they began construction of the fort near the South Platte River in modern-day Weld County, Colorado.

The adobe fort was built by Mexican laborers recruited from northern New Mexico and the style was patterned after Bent’s Fort. Fort Vasquez is located near the South Platte River, six miles south of the present town of Platteville, Colorado.

It was strategically situated between Fort Laramie in Wyoming and Bent’s Fort along the Arkansas River in Southern Colorado along the “Trappers Trail” and became an important trading center for Native Americans. Arapaho and Cheyenne tribes brought hides and pelts to the fort in exchange for necessities, such as Hudson Bay blankets, kettles, pots, and pans. 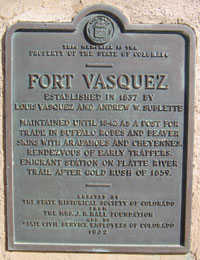 In the early 1860s, Fort Vasquez was rebuilt and for a period of time, it was used as a stop on the famous Overland Stage system. Later it became a base point for the United States troops sent to Colorado to quell Indian uprisings.

Sadly, the foundations and a few feet of the exterior walls were all that remained by 1932. In 1934, the owners of the Fort Vasquez Ranch – Pearl Perdlew and Ethel Hoffman – deeded an acre of land surrounding the fort to the Weld County Commissioners.

Fort Vasquez Restoration
In 1935 and 1936, the Works Project Administration (created by President Roosevelt’s New Deal Administration) crews rebuilt the walls from existing bricks on the location. Features included the rebuilt fort with guard towers, firing ledges, and portals based on the best information available. 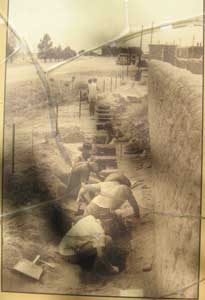 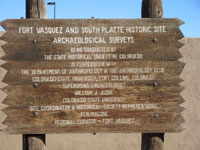 Between 1968 and 1970, Colorado State University students excavated more than 4,000 artifacts. Their work established the original dimensions of the fort – 100 ft x 98.5 ft and located the true foundations for the interior walls and fireplaces.
Location
Fort Vasquez is located north of Fort Lupton in the median on U.S. Highway 85, three miles south of Platteville. It is listed in the National Register of Historic Places and is administered by the Colorado Historical Society.

In June 1940, the chapter placed a monument in the Junior Chamber of Commerce Park on South Main Street in Brighton. The inscription reads:
“Dedicated to the Pioneer Spirit of our Early Settlers erected by Fort Vasquez Chapter of the Daughters of the American Revolution 1940”. 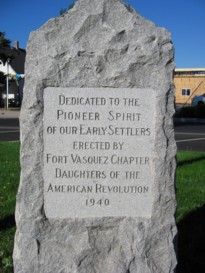 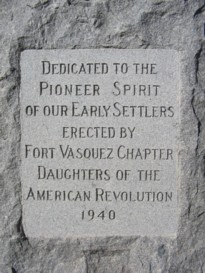 We invite and welcome you to attend any of the Fort Vasquez Chapter, NSDAR, meetings or events and meet our Daughters. Our regular chapter meetings are held at 9:30 a.m. on the first Saturday of each month, from September through June. If you would like to attend a chapter meeting or event or to learn more, please email our chapter using our Contact Us form. 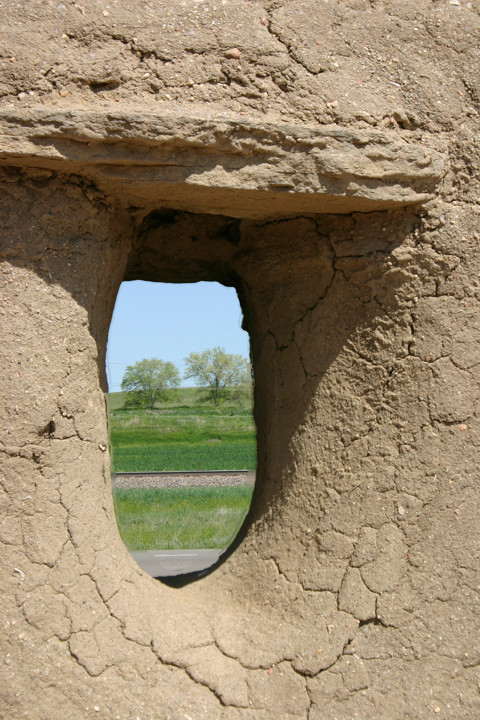